Ham radio aerials-half square is a simple to build wire aerial which offers gain and relatively low angle of radiation in both directions broadside to the wire.

The half-square aerial consists of two-quarter wavelengths of copper wire vertically polarised with a half wavelength of wire connecting them along the top, one of the corners are fed with coax the center going to the long half-wave portion the braid connected to the quarter-wave section.

I used a small plastic box fitted with a so-239 connector at one of the corners of the aerial this allows your coax cable to be attached to the wire and then back to your transceiver.

Modeling the aerial with mmana a free aerial program gives us about 4db over a single vertical radiator, the feed point is, of course, higher than a bottom-fed vertical aerial.

I found I could achieve an SWR of about 1:5:1 ratio using this aerial after a little tuning according to the software mmana shows a beamwidth of about 60 degrees and about -1.9 dB at around 5 degrees off the horizon, with no radiation of signal developing at 90 degrees to the top wire, a good simple cheap aerial for DX

Running the aerial in a north-south direction will give you gain over a single vertical radiator in the east-west direction ideal if you wish to target the U.S.A. from the U.K.

The half-square is easily made but if you feel that you wish to purchase one this link will take you to a Ham Radio supplier. 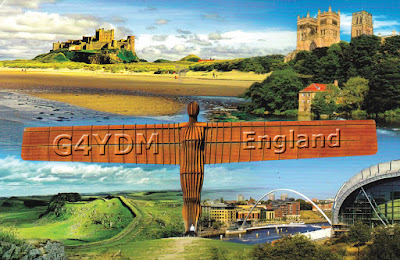