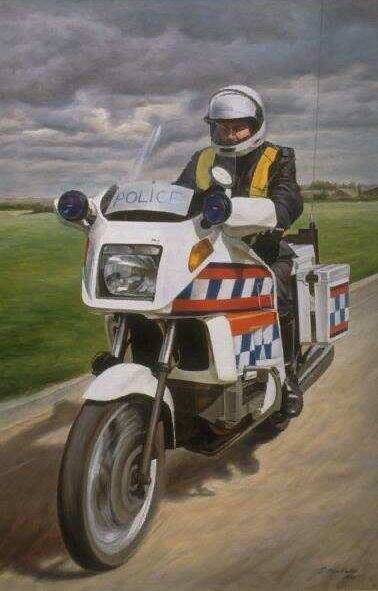 Ham Radio operator-catches BMW Motorbike in action.     I was driving down the A194M on this particular day when I spotted a Policeman on the hard shoulder, he looked as if he was broken down because he was attempting to repair a part on the back of the bike. I pulled up and asked him if he wanted any assistance, obviously, he had a radio fitted to the bike and had already called in for help. He thanked me and said that the forces breakdown vehicle was on its way.

I thought a lot about the bike and the Policeman for some time and wondered if motorbikes had been painted before. There were some examples on the internet, mainly Harley Davidson machines which looked very attractive, some lucky people probably have a bike painting hanging on their wall. There were others that looked as if they were off-road bikes used for scrambling.

I knew that Jarrow Police Station was where the local police motorbike division was located, so I called in one day and asked if one of the officers would allow me to photograph him and his motorbike, low and behold the same chap who I had asked if he needed help rang me up and agreed to meet me near my home in Washington Tyne Wear.

I took a number of photographs of his motorbike, he placed it on its stand and pictures were captured of what I thought would be difficult areas to paint. I was right two areas of the motorcycle turned out to be more than a challenge when it comes to capturing them in oil. The headlamp proved to be very difficult due to the fact that I hadn't painted a light before. The other area was the wheel, pictures were taken when the bike was static, my painting needed to show the bike moving, I think the painting would have turned out rather flat painted static.

My painting of a BMW motorbike has been on many tours exhibiting it in many local art shows.,I am still being asked about it a number of years on. As I have previously said you simply can't beat getting out there and showing people what you do, suggestions keep popping up all the time. Many have asked if I do racing cars or cricket players.

Can you spot the artistic license in my painting of a BMW Police motorcycle, may Police officers could not see anything wrong they were just amazed at the amount of detail I had added. Well, I, ll tell you, we drive on the left-hand side of the road in the United Kingdom, the bike is traveling on the right. It doesn't make any difference on which side of the road you paint a vehicle it does not take anything away from the work but I thought I would let you know about this point.