Ham Radio Operator-where I was born  My enthusiasm for art started when I was around 6, I usually got a Disney coloring book for Christmas. Bespoke work is originally created by you and usually consists of one portrait or painting, however, a triptych consists of three panels or paintings-they look very interesting when placed on a plain wall-art is and always has been in my opinion the best way to furnish.

I paint bespoke portraits mainly, dogs and people have been the main theme-up to now-always think outside of your comfort zone, some call it box. Doing work or creating outside your normal artistic interest helps with your skill development and self worth-it adds to your confidence when you do something new.

I was born here:- Shafto terrace in Washington County Durham. A mining community back then in 1955, Dad was a blacksmith at the local F pit. 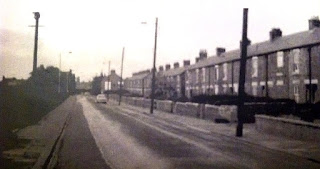 Who would have thought that the boy at 21 would go on to paint? life is strange it has so many hidden turns and experiences-that makes it fun, at least for me.

This is my dad, Stan a portrait in oil on canvas, stretched and prepared with gesso before being applied with paint so rich and vivid the colors will last for many years, I love oil nothing is like oil as a painting medium. 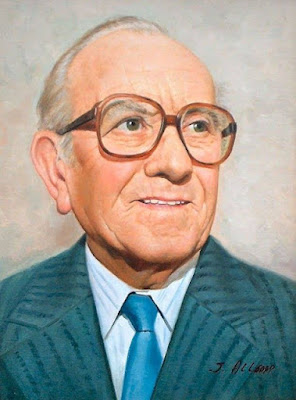 Another picture of where it all began for me all those years ago in Shafto Terrace drawing the cartoon characters from Disney books next to the coal fire. It was so cold in the winter we used to get the weather forecast before going to bed-no heat upstairs just the hot water bottle to warm up your feet. 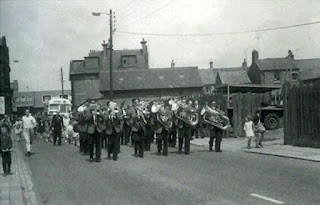 The picture shows the colliery band marching along Spout Lane which Shafto Terrace was built on.

From Disney in 1955 to a portrait of my mother Doreen painted around three years before her untimely death in 1995.

Here is a picture I took a number of years ago, around 2012, showing the colliery band marching down the front street in Washington.  The Durham big meeting as it is called happens every year here in the northeast of England, its an old tradition where mining families take the bus and join countless other families throughout the northeast to Durham to hear politicians give speeches, prior to catching the bus to Durham they march down their towns main street behind their colliery band. 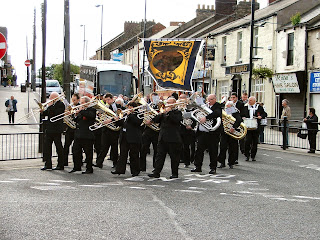 Ham Radio operator-explains funny painting.  Chimpanzees, Bankys take on parliament is a wonderful piece of art-what does it do for you? it speaks volumes to me, but art should that's why its produced, look carefully at the work, does it remind you of something else? it could have been developed with sheep, listening to parliament it seems as if that's what you must be to be part of a group and like all sheep, you must follow the matriarch or you become a black sheep and removed from the party.

I love art I could wander around galleries all day-yes I have done such a thing clutching my pencil and notebook to catch every thought that springs to mind when looking at works of art. Try it some time, if you want to hear controversial discussions go to an art gallery, you will enjoy it.

Look at this artwork, it's very well done tonal qualities colors are all vivid, it looks very real-does it make you smile? I laughed out loud when I first saw it, what does it evoke in your sub conscientious? 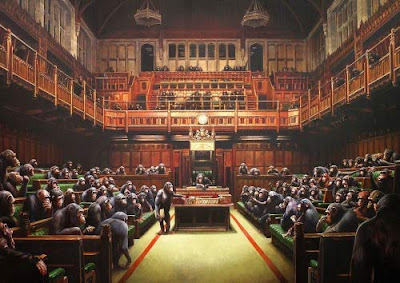 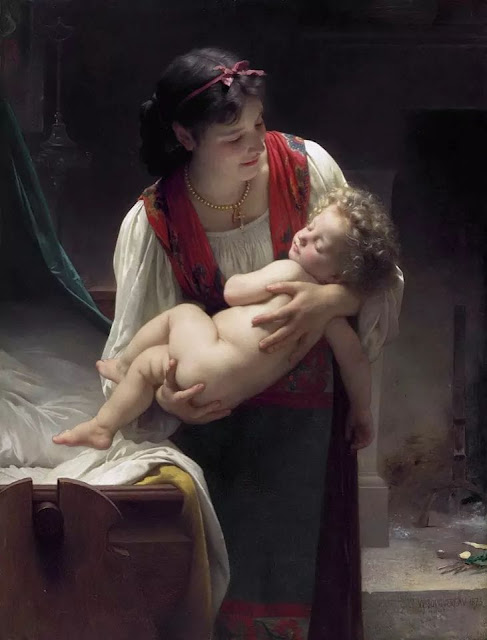 Ham Radio enthusiast-and Artist a Beautiful painting.     This painting is so beautiful-does it remind you about the days when your Mother carried you to bed?

Beautiful paintings with exceptional stories-marketing, anything that is made needs a story behind it-whether a new mobile telephone computer car or a political philosophy, they all have a common thread-without a description, they are flat and un-interesting-add a story and they come to life.

Words are the strongest most addictive drugs known to man-words in a book form great everlasting pictures in your mind's eye.

Pictures speak thousands of words, I can look at a portrait or painting pictures, and write volumes-yes words with pictures to inspire the writer in all of us you just need to do it. Look at a painting or portrait and write down what you see, make bullet points returning to your notes help you write.

I get hundreds of emails from this blog, many from people who ask, John what should I paint, What sells, where do I start-If I knew the answer to these questions which are very common, I would be worth a million pounds!

Be patient with yourself, don't rush take your time-but start and do it, the longer you wait the harder it becomes.

Procrastinators do what they do best-nothing.

Sit down and write doesn't matter if someone else doesn't like your theme or voice, start and write for yourself-you will come to enjoy writing.